Atari Jaguar emulation is something that has still to be fully realised in terms of there being a well established emulator which is widely used. Which is probably why you are here searching for the best Atari Jaguar emulator! This is not to say that the emulators out there already are not good, because that is certainly not the case.

Options are still fairly limited, but you can certainly get to play your Atari Jaguar favourites with the following selection.

Atari Jaguar emulator, Phoenix, is without doubt the most compatible and best performing Atari Jaguar emulator available at the moment. Although there is a slight catch, it is in Russian, so you may wish to obtain the English language patch which is available here, along with instructions on how to apply the patch. it is really simple to do though, you just take the language patch files and overwrite those that are in the Phoenix emulator directory.

Phoneix also includes not only Atari Jaguar emulation, but also 3DO, Sega Game Gear & ColecoVision, so it’s a great little package to try out.

If it’s just getting up and running easily and don’t mind the occasional issue with compatibility, then Virtual Jaguar core on RetroArch is probably your best bet.

Although still not perfect in terms of compatibility and running at full speed on some games (performance will depend upon the device you use), the best Atari Jaguar emulator for Android comes in the form of the Virtual Jaguar core for on RetroArch.

Not only will you benefit from the familiarity of RetroArch (assuming you already use it), but you will also from the ease of use and many features of RetroArch / Virtual Jaguar. It also uses a built in BIOS which makes it even easier to get up and running.

The Virtual Jaguar core is currently only available via RetroArch Plus, which only works on Android 8.0 upwards, but means you have access to the much wider range of emulator cores, includes Virtual Jaguar.

As mentioned above for Android devices, I would still recommend trying out Virtual Jaguar on RetroArch on other devices too as it is definitely the easiest way to try out some Atari Jaguar games with minimal fuss.

The Virtual Jaguar libretro core is still being evolved, so will likely end up being the emulator of choice for Atari Jaguar fans. 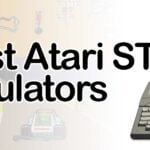