As with most consoles, choosing the best Sega Master System games is not only subjective, but a challenge! Whilst the NES reigned supreme in the US, the Sega Master System developed a devout following predominantly in Europe. It certainly was on my radar as a kid, with my own brother picking up an original ‘wedge’ Master System 1 complete with Hang On as the built in game. It wasn’t until a few years later when i got my own Sega Master System II, with Alex Kidd in Miracle World built in. A bit behind the times since the Sega Mega Drive/Genesis had already been released, but that did not stop me from enjoying my first taste of console gaming.

Here we take a look at 22 of the best Sega Master System games.

We start off the list with perhaps an obvious choice, Sonic the Hedgehog blasted his way onto the Master System with not a direct copy of the Mega Drive / Genesis game, but his own brand new game. Whilst the game shares a lot in common with the original 16-Bit version, the Master System and Game Gear versions have their own unique levels and soundtrack.

Sonic the Hedgehog was included as the built in game on the later versions of the Master System 1 & 2.

Alex Kidd in Miracle World is another classic Master System title that was also built in to earlier both versions of the Master System 1 & 2, meaning it is well known as a result. Alex Kidd in Miracle World is a platformer which sees you punching enemies, overcoming obstacles and playing rounds of Rock, Paper, Scissors (Or Janken, which is also the name of the main boss in the game).

The game is also considered rare in it’s cartridge form, due to the game being mainly available built in to the systems.

This is the first of three Wonder Boy games for the Master System that have made this list, and we start with the third game in the series. Wonder Boy III – The Dragon’s Trap is considered the best in the series on the system. Wonder Boy III is an action/adventure platformer which sees Wonder Boy cursed by Mecha Dragon and is transformed into different creatures throughout the game.

The game recently underwent a remaster and appeared on the likes of the PS4, Switch, Xbox One & PC.

Shinobi is an 8-bit conversion of the original Sega Arcade classic for the Sega Master System. Shinobi is an earlier game in the Master System’s life, but does a fantastic job of recreating the original. The game also includes the shuriken throwing levels as well as introducing a new life bar system and fighting abilities.

This is a great example of how well the Master System could produce scaled back arcade ports.

Phantasy Star is one of Sega ‘legend’ Yuji Naka’s earlier games and is now considered of significant importance in RPG gaming for its characters and blend of using science fiction and medieval fantasy worlds.

Phantasy Star is also one of the most successful examples you will find in the RPG genre on any 8-bit system, which proved a real boost for the Sega Master System at the time.

An easy game to pick up and play and keeps you coming back for more.

I’m on the fence as to which game is better between this and the original, they’re both highly recommended.

Streets of Rage on the Master System was always going to be a big ask, but surprisingly, a decent enough job has been made with this conversion of the original Mega Drive / Genesis game. Sure, the amazing soundtrack of the original has had to be forgone as well as the multiplayer option, but Streets of Rage on the Master System certainly did enough to scratch the itch of those not fortunate enough to own the 16-bit version.

The Master System conversion of the arcade classic, R-Type is definitely one of the greatest 8-bit versions of the game. Whilst the game does suffer some sprite flickering and slow down in places, it is a very impressive conversion with very little compromised in terms of the level design and gameplay. The huge bosses are present along with excel colour reproduction of all of the games assets.

R-Type is a very tough game which has huge replay value as a result.

This game is a pure side scrolling platformer, it does not have the adventure elements seen in the subsequent Wonder Boy games, but is still a must have on the Master System.

Psycho Fox is a game you will see in a lot of in other lists for the Master System. You get to play as Psycho Fox and his friends in this classic side scrolling platformer. The game has more in common with the NES Mario games more than the likes of Alex Kidd in terms of it’s design.

It’s a reasonably challenging game and one that impressed at the time with its colourful and fun visuals.

Another arcade conversion here in the form of Golden Axe. This is another game that whilst the Master System may not have the sheer guts to compete with the Mega Drive / Genesis conversion, it does a stand up job in what it delivers. Similar to Streets of Rage, there are compromises that have been made in terms of there being no multiplayer and there is now only a single character available to play through the game with. Besides these points, Golden Axe is a very enjoyable and impressive conversion.

Once again, thanks to Sega’s wealth of arcade games, we have another arcade port on the Master System. Outrun manages to retain the spirit of the arcade original, whilst albeit slightly downgraded, the graphics and sound make an excellent transition to the 8-bit system.

The Master System proving once again here that it could outperform the NES in terms of arcade conversions.

Released at a time when Michael Jackson was at his peak in popularity, it was hard to find a system without a Michael Jackson game. This version is a clone of the Mega Drive / Genesis version and is another prime example of what the modest Master System can do. Yes, the sound and music lacks the punch of the Mega Drive / Genesis version, but a decent effort was made to convert the visuals and gameplay down to the Master System here and really cannot be faulted in that respect.

Ghouls’n Ghosts part of the Capcoms well known side scrolling platformer franchise. Released on most computers and consoles of the time, the Master System version can certainly hold pride of place as one of the better versions, if not almost certainly the best 8-bit version of the game. All of the gameplay of the arcade is here, but just with scaled back visuals and sound.

Another wonderful representation of an arcade game on the Master System.

One of the all-time arcade classics was a fairly early release on the Master System, aside from minor graphical differences and obviously the sound and music, this is as good as you can get to a perfect arcade conversion. All of the gameplay remains intact and must have been a real exciting moment to pick this up on your Master System back in the 80s.

We recommend checking this out purely to check out it’s arcade authenticity.

Another Sega arcade classic, Fantasy Zone found its way on the Master System not long after its initial arcade release. You take control of a cute little spaceship with wings and feet, called Opa-Opa. The game screams classic Sega arcade design in terms of its look and quirky angle on classic shooter gameplay. This was one of my earliest memories of the Sega Master System and is a must have for any Master System collector.

A really colourful, fun and challenging game, this is pure fun!

A Sega Master System exclusive, Penguin Land is a puzzle platform game which sees you play as a Penguin who guides eggs to the end of each level by melting and destroying blocks which will drop the egg to the bottom of each stage. It’s a simple but fun game which typically represents the Master System of the time.

Hang-On is one of the more well known Master System games because it was one of the games originally included as a built-in game on the original Master System. Hang-On is a very smooth, fast race against the clock motorbike racer. Not visually close to the arcade game, the Master System version adopts a more colourful, cartoon-like visual but still has its roots at heart. Be warned though, it can be a real tricky game, especially on the original Master System controller and its tendency to see you explode should you make contact with any other racers or objects!

Cloud Master is a port of a Taito arcade game which found it’s way on to several 8-bit systems. It is a side scrolling shooter which is notoriously difficult! Battle a range of quirky enemies, such as bird men and bowls of soup, and defeat the end of level bosses!

It’s all a bit crazy, but that’s what we like about many of these older 8-bit games! 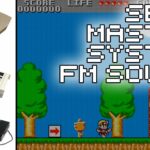 What is the Sega Master System FM Sound Chip? 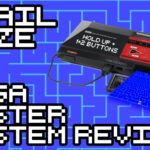 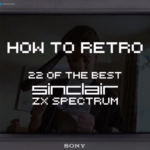 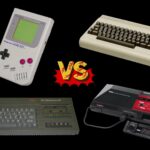